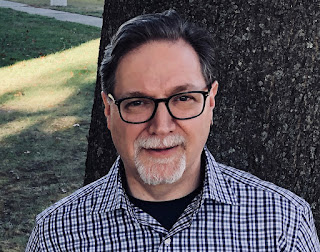 The museum’s long cast iron windows
let in streams of refracted light;
these golden arrows point the way
to glass display cases that reveal
the cursive precision of
one romantic poet from centuries past
who composed sonnets full in his head
long before ever touching quill to paper:
lines of perfect iambic pentameter,
well wrought and committed
with meticulous care to an ideal page
in a pretend world without flaws.

The next book is its direct opposite,
chaotic meanderings of the wild jocular Irishman
whose obsession with language led to
scribbles, doodles, lines crossed out and more.
This sorry mess of ink-stained genius,
a hectic collage of ideas struggling
to find order and expression,
captures the ongoing discontent
of one dedicated beyond reason
to achieving precision of meaning,
striving for years toward a particular vision,
a flawless Fibonacci sequence of sentence.

Standing on metaphorical shoulders
of these literary giants,
I take in the long view,
knowing my college-ruled notebook
is full of pastiche and borrowed phrases,
trite and hackneyed emotions
that my adolescent angst feels
as full of import, moving and real.
Perhaps some muse’s magic
might yet transform them
from cave painting
to studied Dutch master.

It was there in that cavernous hall
that I flew above the polite crowd
of paying spectators, riding the particles
of  the dusk’s dying light unnoticed.
That cold afternoon I also committed
to a life in art, a silent self’s promise
to keep at the simple and complex process
of transforming thought and feeling
into some memorable combination
of graceful heartfelt intelligence,
some phantasmagoric cavalcade
greater than the sum of its parts.